A private consortium backed by Lend Lease and Probuild won the right to design, build and operate a $140 million multi-storey car park at the QEII Medical Centre. RM Surveys have been contracted as the surveyors for both stages and all 7 floors of the project.

Stage one has been completed and stage two has begun of a new multi-storey car park that is being built on the site of the QEII Nedlands Medical Centre to cater for the increase in traffic when a new children’s hospital is built on the site. The car park is part of a $1.17 billion project to construct the new state-of-the-art hospital and associated facilities, with completion expected by 2015. The car parks are scheduled to be built in two stages and completed by 2013, before the new hospital opens.

The multi-storey car park will have 3,325 bays and will be operated under a Public-Private Partnership, increasing the total number of bays on-site by 1,525 to 4,560 bays. These will accommodate priority one users– that is, patients, visitors and some staff such as clinical staff and night shift-workers. 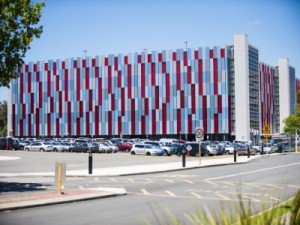