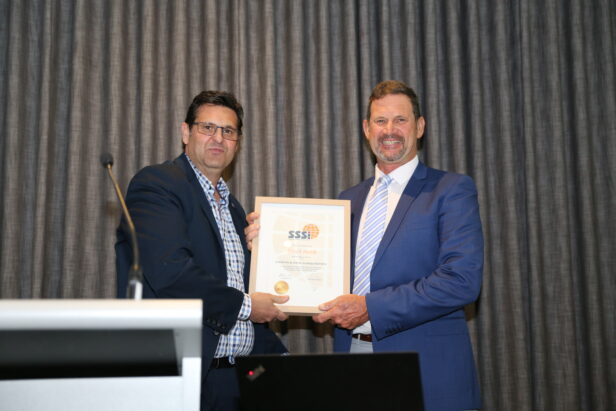 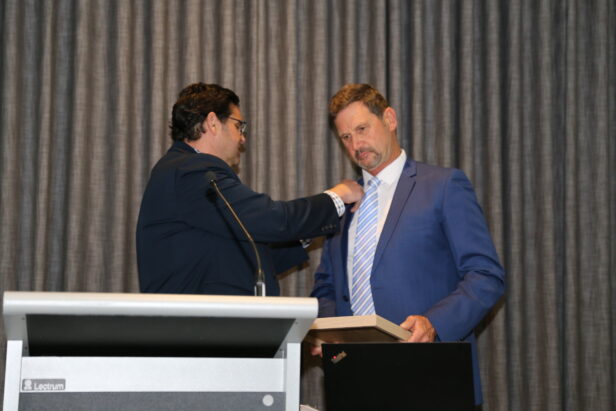 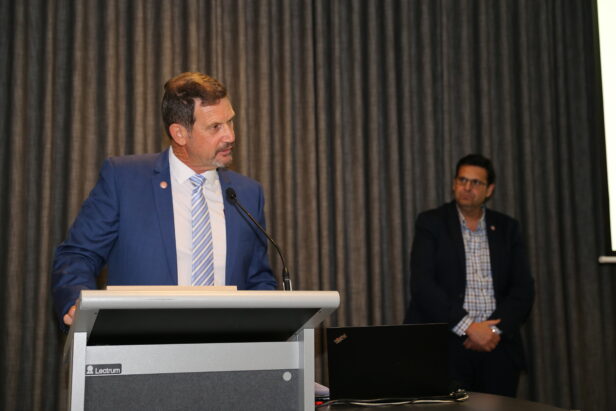 Congratulations to Geoffrey Robb, who was conferred as Fellow of Surveying & Spatial Sciences Institute (SSSI) on Friday 5th December. Fellow is awarded to individuals who have made a significant contribution to the Institute and the Profession and are only approved following a rigorous nomination and election process.

Geoff has been a great supporter of nurturing the talents of the next generation of surveyors and is passionate about giving back to the community. Over the years, Geoff has made a significant contribution to the surveying profession and, in 2019, was awarded the WA APSEA Professional of the Year. Geoff is a founding member of the Spatial Sciences Institute (SSI) and is a valued member of SSSI.

Geoff Robb’s surveying career started with the WA Department of Lands and Surveys in 1981, and after several years with the department clearing lines of sight, Geoff changed direction and bought a garden nursery and nurtured plants. Thankfully, in 1995, Geoff rejoined the Profession and, with business partner Greg Birch, formed RM Surveys. RM Surveys is now a leading WA company employing more than 60 staff with an enviable portfolio of highly technical projects, such as New Perth Stadium, Matagarup Bridge, New Perth Museum, Ritz Carlton and many others.

Geoff has continuously supported the development of the next generation of surveyors. Every two years, Curtin University organises a two-week expedition to an outback area of WA, and Geoff has volunteered as a mentor since the second expedition in 2006. Geoff brings the mentoring team a unique skill set and is well respected among students and peers. Within his own company, he also actively engages in mentoring students through its graduate program. Geoff also serves on the Advisory Board for the Curtin University Department of Spatial Sciences, providing input into its future direction.

Geoff is also passionate about giving back to the community. Following the recent devastating bushfires in the Perth hills, Geoff initiated a program to help landowners re-establish their property boundaries so that replacement fencing could be correctly located. This work was completed pro bono through RM Surveys and involved 43 properties and many very grateful landowners.

Geoff volunteers with Variety – The Children’s Charity WA as a fundraiser and competitor in Variety Club events. Geoff has also been recognised as a leader through his generous support with Triathlon Australia.

Over the years, Geoff has been recognised for his contributions to the surveying profession. In 2019 Geoff was awarded the WA APSEA Professional of the Year for his outstanding contribution to the surveying profession over many years. In addition, Geoff’s direction within RM Surveys resulted in the company being presented the APSEA Judges’ Commendation in Spatial Enablement (in 2018) for their innovative spatial methodology in the construction of New Perth Stadium. Geoff was a founding member of the Spatial Sciences Institute and is a valued member of SSSI.